Without A Trace * Escape to Ponderosa *

Summary: An arrogant and pompous Frenchman, and his sister, Eloise, show up in Virginia City. He claims to be the reincarnation of Francois Villion, a French poet. To complicate matters, he challenged Hoss to a duel – seeking satisfaction for a perceived insult.

These users thanked the author Episode Guide for the post:
LittleJoe4Ever 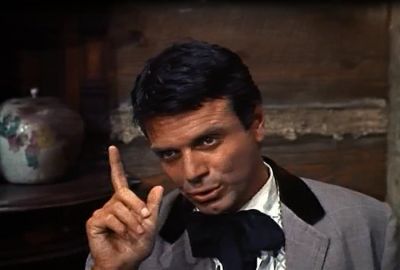 Was this guy really crazy? And if so, what could have been wrong with him? Was he possibly bi-polar or maybe schitzophrenic, or was he just a good actor? What would be the benifit to his lying about being a French poet from the past? Sort of boggles the mind.

Were these guys crazy, or just absent minded?

Even if the writers forgot, how could Dan and Mike forget they dueled one season earlier in "Badge Without Honor" and do a storyline where Hoss didn't know how to fight with an epee?

So what's your thoughts on this hilarious episode. I'm a fan.

Leave your front door and your back door open. Allow your thoughts to come and go. Just don't serve them tea.
-Shunryu Suzuki
Top

I was glad to see Francois leave the Ponderosa! He caused all kinds of trouble. I loved the scenes of Joe and Eloise down by the water! Poor Hoss couldn't use that epee no matter which episode it was.
Top

January wrote: Was this guy really crazy? And if so, what could have been wrong with him? Was he possibly bi-polar or maybe schitzophrenic, or was he just a good actor? What would be the benifit to his lying about being a French poet from the past? Sort of boggles the mind.

I don't think he was lying; I think he really believed he was the reincarnation of Francois Villion. A lot of people believe in reincarnation; I guess it makes them feel "special", since their previous life always seems to be a famous or important person, never just a farmer or baker.

January wrote:Even if the writers forgot, how could Dan and Mike forget they dueled one season earlier in "Badge Without Honor" and do a storyline where Hoss didn't know how to fight with an epee?

In "Badge Without Honor", Hoss was just slapping the epee around; he wasn't really dueling with Joe. Joe, on the other hand, seemed to know what he was doing. Since we've seen Joe can fence, it does seem odd that Adam would be the one to instruct Hoss, but maybe he took a fencing class at Back East U.

I like this episode because it is so farcical . And once again, Hoss shows his sensitive side by crying when being read (bad) poetry.

These users thanked the author ellen for the post:
LittleJoe4Ever

Congress is so strange. A man gets up to speak and says nothing. Nobody listens. Then everybody disagrees. - Will Rogers
Top

Speaking of the poetry scene, I rather enjoyed the look on Adam's face. It was almost like, "Who cares? Just hurry up and be done with it already." And then the strange look he gave Hoss? Almost like he was thinking, "Is he crazy? How could he cry over something that silly?"
Wait a minute, wait a minute. What you're saying is that at your age, you don't know the difference between a girl and a horse?

Ben to Little Joe in "Day of the Dragon."
Top

I love all comedy episodes. All the actors had such good timing for comedy and this was one of them. Real entertaining, at least to me. I am glad I have it on DVD so I can watch it whenever I need a funny bone tickled.

These users thanked the author BBG for the post:
LittleJoe4Ever

This isn't one that I I often watch though it does have some good points (pun intended). I enjoy seeing all our boys working together with some good lines courtesy of the writers. Perhaps I just don't appreciate the humor.
Proud Owner of Adam's Poetry Book, Lafe's Auction June 2016
Proud Member of BHA ♪ ♫ ♬ Buffalo gals won't you come out tonight? ♪ ♫ ♬
Top

I enjoy this episode for the farcical comedy and all four Cartwrights seem to be having lots of fun.
I wonder if that Frenchman eventually has his dream come true at the end of a rope

These users thanked the author EllieK for the post:
LittleJoe4Ever

This episode is not one of my favourites, but I enjoy the fencing scene with Joe and Adam desperately trying to make Hoss realize the seriousness of his situation and him taking it rather lightly, driving them two crazy

The Frenchman bothers me (I suppose that´s just what he is intended to ) and when our boys finnaly have him and his sister on that stagecoach (one would think the Frenchman learned his lesson), he startsall overagain about having his sister married and then being free to be hanged

These users thanked the author Chenoa for the post:
LittleJoe4Ever

"They´re three fine boys Jed...hard workers and a good head on their shoulders...they are close to each other as brothers should be!" Ben in "Springtime"
Top

Not one of my favorite episodes, but it does a couple of good moments. First off, Eloise bothered me and Joe running around after her bothered me. I did like how the Frenchman cut of Hoss's buttons.

As someone said earlier, the continuity was not always there. Yes, Hoss did "play" with an epee in season 2, but you also have Adam ridiculing Joe and his "playing" with an epee in the pilot episode. Obviously, Adam is well versed with the epee, whether from college or maybe he did learn from Marie too!. Joe does seem to be better and yes, Joe should have been the one teaching Hoss, but Adam being the oldest takes over the teaching role.
Top
Post Reply
19 posts

Users browsing this forum: No registered users and 12 guests